For bands in San Jose, existence itself is a political act. With almost no venues at their disposal, and a culture dictated by billion dollar corporations, passion is the only option. Formed in 2017, awakebutstillinbed emerge from this environment screaming out for connection and meaning, their music “a vivid rendering of a life spent standing on a precipice” (Pitchfork).

Absib’s debut What People Call Low Self-Esteem Is Just Seeing Yourself The Way Others See You is an album about being crushed by expectations, and loaded with other people’s desires. It is untamable, and undeniable. What began as the solo project of singer/guitarist Shannon Taylor, absib are now a powerful group, part At the Drive-In, part Kim Shattuck, and (at times) part pre-Good News Modest Mouse. Explosive and honest, Taylor’s lyrics painfully, purposefully tear out the false seams and sutures that shape us in the eyes of others, revealing underneath the beautiful, beating heart of whatever it is we call the self. On paper, it might sound like familiar territory for emo, but don’t be fooled: absib map out whole areas of the soul previously pushed to the shadows. Plus, they fucking rock. (bio by Mike Huguenor) 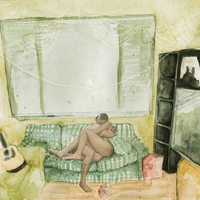