No matter where punk veers off course thank god there will always be bands like Providence, RI's Best Practices that can firmly right the ship. Featuring current/former members of Light The Fuse And Run, Wow, Owls!, Weak Teeth and Jesuscentric, Best Practices is a return to the fundamentals of punk rock. On the band's Tiny Engines debut, The EP LP, the quartet lets loose a whirlwind of (garage power pop) punk fury. Recorded with Will Killingsworth (Orchid, Ampere) at Dead Air Studios, Best Practices pummel their way through 9 songs in 12 glorious minutes. The band comes close to careening off the edge at points but never seem to overtake themselves. Chock full of razor sharp hooks Best Practices lays down a furious gauntlet that is as catchy as it is exhausting. All your left with as The EP LP fires towards the finish line is the feeling that you just want to do it all over again.

Formed in 2010, Best Practices is a return to the fundamentals of punk rock. When vocalist/guitarist Jeff Byers (Light The Fuse And Run and Wow, Owls!) moved to Providence in 2009 he had a batch of songs written before meeting up with drummer Paul Dechichio (Jesuscentric) in 2010. The duo worked over those original songs and added a few others to the mix. Eventually, the pair wrangled a second guitarist and bassist, Neil King and Jon Pagano of Weak Teeth, to fill out Best Practices and the band started to play shows in April 2011. Once that happened more songs organically came together as a 4-piece and King contributed a few songs of his own as well. And the end product is an amazing batch of songs that while not necessarily written as a cohesive whole, work flawlessly as an album.

Bands like Best Practices remind us why we came to know punk in the first place. It wasn't about fashion or style or trends. It was simply about letting go. Punk rock was supposed to be uninhibited. Check your bullshit at the door. But, inevitably, somewhere along the way, it got too complicated. The message seemed to get lost in translation. In 12 minutes Best Practices tear it down and bring it back to its vital core. And for that we should all be grateful. 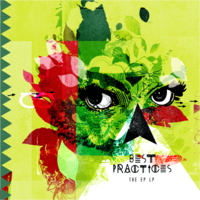