Lauded as one of 2009′s very best records by critics and fans alike, Castevet‘s amazing debut, Summer Fences, paid homage to the quartet’s influences – bands such as Chicago brethren Ghosts And Vodka, The Appleseed Cast, Small Brown Bike and The Casket Lottery – while never completely succumbing to the weight of those torchbearers’ important contributions to the scene they helped build. Shades of gorgeous, twinkly 90′s Midwestern emo collided with a brawny-yet-brainy punk rock explosion and in the process, spawned something altogether exciting and new.

If you haven’t jumped on the Castevet bandwagon, the quartet’s latest achievement, The Echo & The Light, is just the release to welcome the uninitiated. While no one is claiming that this barnstormer of an LP falls anywhere near the “poppy” category, there’s no denying that it’s the outfit’s catchiest, most upbeat and dynamic offering to date. More strikingly though, Castevet continues to embrace the warm, fuzzy nostalgia of emo’s halcyon days while progressively moving toward uncharted territories.

Picking up where Summer Fences left off ( and subsequently left everyone clamoring for more ) The Echo & The Light doesn’t miss a single beat, yet it goes a step further by honing in on the band’s most positive attributes. Castevet leans less on the sweeping atmospherics and lush soundscapes of its debut, opting instead to kick up the distortion and fuzz pedals that lace kinetic, intertwining guitars and a dexterous rhythm section. A greater emphasis is placed on the gritty vocals of Nick Wakim, which are expertly juxtaposed against concise songs that coil tightly around propulsive, math-tinged instrumental passages. If Summer Fences was the result of a band experimenting with an abundance of great ideas, The Echo & The Light is that outfit using only the very best of those.

The Echo & The Light was originally pressed in extremely limited quantities on CD and cassette tape ( Kid Sister Everything / Ice Age Records ) as a six-track EP for the band’s 09 Winter tour with Grown Ups. All the songs – plus two brand new offerings – have since been re-recorded by Dennis Pleckham at Comatose Studio in Bradley, IL and mastered by Carl Saff ( Melt Banana, Young Widows, Ghosts And Vodka ) in Chicago. Tiny Engines has taken these eight amazing tracks and issued 500 12-inches on white ( 300 ) and black ( 200 / 180 gram ) vinyl with stunning new artwork that features matte coating and UV spot gloss. The label will release the LP on August 17, 2010 in both 12-inch and digital formats while Stiffslack Records will release a CD version exclusive to Japan.

Each copy of Echo & The Light will include a free mp3 download code for all the songs, which were generated by blind / deaf buhdist monks from Dhumra Village in a very remote region of Ladakh. 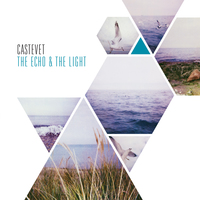