It's no secret that other than the University of Florida, the quaint, tree-covered city of Gainesville also lays claim to a flourishing punk community frequently regarded for its abundance of bewhiskered denizens, high-volume PBR consumption, ubiquitous Hot Water Music and Against Me! tattoos and an annual free-for-all better known as The FEST. What's more is that the county seat of Alachua County has become synonymous with a scene that launched the careers of some of the most tunefully gruff punk bands in the country, not to mention one the labels that helped lay the groundwork for the coinage of the term "OrgCore."

To say that Wavelets and its singular brand of somersaulting, emotionally charged indie rock (let's just call it emo) is surviving in Gainesville is no understatement. On the surface, the outfit seems more suited to expansive Midwestern plains and the region's rich history of off-kilter whimsy - bands such as the oft-exalted Cap'n Jazz or label mates CSTVT - or even Pennsylvania's newer breed of emo revivalist like Algernon Cadwallader, Snowing and Street Smart Cyclist. And while Wavelets borrows from peers and progenitors alike to create a sound that is both comforting and endlessly exciting, there's no doubt that, at least initially, it feels out of place amongst Hogtown's usual punk rock fare.

Of course, great music usually transcends scenes, genres and geographical limitations. In that sense Wavelets is undoubtedly thriving. Since its 2009 inception, the five piece has steadily carved a niche for itself within Gainesville's independent community, and after a series of self-released digital EPs and a split 7" with hometown brethren Senders, Wavelets burst forth with its Tiny Engines-released debut full-length, Athaletics.

Recorded by Matt Finch and Ryan Williams at Black Bear Studios (Hot Water Music, Chris Wollard, City Of Ships), Athaletics' nine songs in a mere 23 minutes is all it takes for Wavelets to establish its rightful place, not only with Florida's bearded punk elite but also amongst emo's most creative and dynamic forces. 23 minutes of kinetic, unpredictable yet easily digestible goodness; Wavelets is thriving, indeed.

Powered by front man Steven Gray's raspy vocals and clever wordplay, Athaletics is like an old friend that is always welcome to visit. Each spin feels warm and comforting - a nostalgic journey that never loses its luster - yet there are new intricacies and electric passages that transmit in different, exciting ways every time. Athaletics is virtually impossible to resist and soon you'll find yourself unwittingly humming along with tracks like the animated "We're Really Jazzed About the Gig" or the more straightforward, punk-tinged "My Dad The Manatee." Other songs such as "Tailfoot" appeal to the sweet pangs of yesteryear while "Cannonball" lives up to its name with powerful melodies and the emotional heft that good closer should exhibit.

Wavelets' boundless energy, freewheeling, friends-first attitude is universally appealing, as is the fact that despite emulating a style that's often (and sometimes unfairly) characterized by its out-of-tune vocals and slapdash arrangements, the quintet forges songs that are both carefully composed and instantly catchy. It's this unique blend of technicality and structural ingenuity that initially grabs our attention but it's Athaletics comforting nostalgia and sense of fun that really wins us over and begs for repeat spins ... even from the kids in Gainesville. 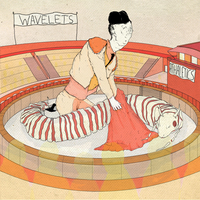