In a scene where abstruse lyrics and ironic detachment are all the rage, Alien Boy’s high-stakes, loud pop is as refreshing as it is surprising. In the grand tradition of emo and pop-punk—and perhaps rock ’n roll in general—lead singer and songwriter Sonia Weber uses her songs to communicate subdued desires and secret grievances. Alien Boy’s debut LP Sleeping Lessons is a collection of lullabies for the pop masochist; like all good, emotional music, Weber’s songs are resonant because they’re unmistakably human.

Alien Boy takes their name from a Wipers song, but elsewhere the group’s PNW lineage is felt in a mordant grit gleaned from Team Dresch and early Heatmiser. It sets the tone for Weber to mix her deep-seated love of early 2000's generational touchstones with a Britpop frostiness to brilliant and totally unique results—from the tremolo dives and Stone Roses references on Ride-y opener “Somewhere Without Me”, to the sun-kissed, sub-three-minute power pop bliss of “600 Days”. Weber’s melodies are so bright and effective it’s easy to forget they come from a place of absolute emotional torment. 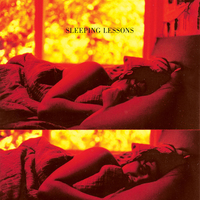