Remember when indie music was wild and unpredictable? Remember when bands were hard to pigeonhole into neat little sub-genres? Well, Cattle Drums will remind you if you have forgotten. Hailing from upstate NY, you might shrug your shoulders at a band named Cattle Drums but you would be remiss by doing so. Mixing post-punk, emo/hardcore, shards of math rock and even traces of dark Americana, Cattle Drums distinguish themselves as purveyors of a sound not yet recognizable to our pampered, innocent ears. Lyrically ambiguous and instrumentally ambitious with harsh, aggressive tones, Cattle Drums truly are a wild awakening for the senses.

The Boy Kisser Sessions + 3 is an eight song collection that puts together the original debut of the band with 3 newer tracks that were recorded near the end of 2010. These songs truly defy classification and open the listener up to create their own unique interpretation of the Cattle Drums sound. Originality roars out of every pore as the band has a staggering sense of urgency and the innate ability to completely change course from song to song yet still sound remarkably cohesive throughout.

Album opener, “New Furniture and Wigs” showcases that diversity from the very beginning as it opens with an ominous blues guitar lick straight out of the Deep South. “Who Punched Pat Moore’s Face” is perhaps the most conventional song here, that is if you excuse the cryptic lyrical imagery. “Sluts And Coconuts” is the band’s most fully realized and accessible song as it swings and sways before exploding at the seams. “Two Pigeons” shows the versatility of Cattle Drums with xylophone and crisp banjo plucking underneath all the lyrical madness. The three new songs added continue Cattle Drums’ consistency and the five minute acoustic closer reaffirms the band’s creative reach.

Need a shock to the system to break you from the mundane of the daily grind? Delve into the madness of the Cattle Drums experience and witness a band operating only by their keen sense of artistic expression. Eccentric and chaotic yet always melodic and intoxicating, Cattle Drums are kicking up dust and noise unlike anybody else right now. Just imagine what is yet to come.

The Boy Kisser Sessions + 3 was recorded and mixed by Mike Natoli at Dickbutt Studio in Suffern, N.Y. and mastered by Steve Sopchak at the Square Studio in Marcellus, N.Y. Tiny Engines will digitally release the record on February 22, 2011 on iTunes and Bandcamp. 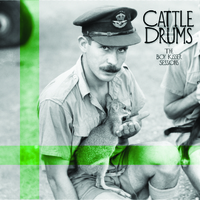