Everyone Everywhere‘s amazing Self-Titled debut LP builds on the rock-solid foundation laid down on last year’s dynamic, unabashedly joyous 7-inch, A Lot Of Weird People Standing Around, and further pushes the band’s sonic palette in exciting new directions at every turn. Sure, those lovely Promise Ring vibes remain – not to mention hints of Braid’s twisting-yet-tuneful angularity, the crackling anti-anthems of indie heroes Superchunk and Piebald’s off-kilter sense of melody – but the Philly four piece has honed its songwriting chops, dialed in its amps and seriously upped the ante with this emotionally taut ten-song affair.

Always shifting and rarely content to follow verse-chorus-verse norms, Everyone Everywhere flexes some serious instrumental muscle with its patented guitar acrobatics, chunky chords steeped in distortion and fuzz, propulsive rhythms and layers upon layers of richly textured harmonics. Lead vocalist Brendan McHugh’s delivery is reserved yet confident, and his intriguing and obtuse lyrical style is a recipe for certain addiction.

This is music that is kinetic, warm and bright and transmits in both nostalgic and progressive tones all at once. While the ten songs ebb and swell with bittersweet melodies and simultaneously driving and intricate soundscapes, Everyone Everywhere’s stellar Self-Titled debut LP is almost all peaks and no valleys. Maybe as close to perfecting the classic 90s emo / indie rock / power pop style as you’re going to hear all year.

Everyone Everywhere’s Self-Titled LP was recorded and produced by Mike Bardzik (Kill Your Idols, Lighten Up, The Casualties, The Boils) at Second Story Sound Studios in West Chester, PA and was mastered by Jamal Ruhe at West West Side Music. Tiny Engines will release the LP on May 04, 2010 in both 12-inch and digital formats. 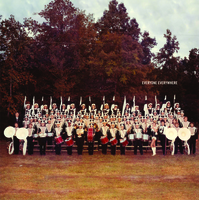