Thelma’s origin seems to suggest that Natasha Jacobs’ musical abilities sprouted from the singer-songwriter almost spontaneously, whilst she convalesced after a life-changing fall from a ladder. Although there is surely more of a back-story than that, this was when she started writing songs and playing guitar. The project itself began two years later as a solo endeavor but soon became a band when Daniel Siles, Maciej Lewandowski, and Juan Pablo Siles joined.

On Thelma’s Self-Titled debut, Natasha doubles down on at least one aspect of the tale; she asserts her right to be fallen. In doing so, “Thelma” reveals both a self that has been projected onto her as well as the fantasy of her own projected self. She juxtaposes her falsetto with her very lowest registers, and couples her most saccharine aspects with squeals.

Many of the songs deal with a problem often caused by projection; lovers fashion each other. But lovers' projections can be very beautiful, and so they are determined to enforce them. For the protagonist of “Thelma”, this often means being made out to be pure, angelic, a sprite. And it's easy to understand why this would be a preoccupation of concern for the songwriter, whose falsetto is the most effortless of things; so natural, easy, that brilliant intricacies convey playfulness, and feels impetuous, impervious, pure.

But the seven songs of Thelma's debut album are anything but pure, and they make no pretense of representing a natural or spontaneous expressive moment. They are fastidious. And they are gigantic. If anything, the songs exude that most impure, un-sweet, un-angelic motivation- ambition. Within the lyrics too there is a thematic insistence on the writer not wanting to be pure or objectified.

Above all, “Thelma” demonstrates real work; an exacting, intricate, sometimes beautifully sparse production with contrastingly serendipitous vocals. It demands attention to the band as a whole, and to Natasha Jacob's work as a composer, vocalist, and a wildly intense guitarist. - Akiva Zamcheck 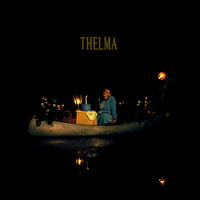